Africa: Hazel Wachira the female Kenya Airways Aviation Engineer that converted B787 Dreamliner to a freighter 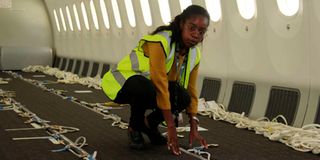 Hazel Wachira, the sensational trailblazer hit the headlines when she led a team of engineers in converting one of Kenya Airways Passenger Dreamliner (Boeing 787) into a cargo plane.
According to Kenyans.co.ke, the historic feat became a defining moment in Hazel’s career.

“The repurposing of this aircraft, being the first such in the world, took a different route from what is normal. It was different because we did not have modification instructions and no one had. What you see here has never been done before,” she stated.

Hazel, who has worked at the airliner for two years, admitted that her dream is to inspire other girls to reach their ultimate potential.

According to nation.africa, Hazel Wachira has many distinct and admirable traits, but the most noticeable is her inability to stay at one position, doing nothing. She likes to keep herself busy with something that counts for the moment.

On the day we interview her — inside the Kenya Airways’ (KQ) recently repurposed Boeing 787 Dreamliner — we quickly realise that part of the fast adaptable tasks for us would be to keep moving with her, as she involuntarily keeps slipping out of the frame.

“Sorry, I get tired standing at one point for long,” she explains after realising she has moved away from the recorder in the middle of clarifying a point.

She then bends to the aircraft’s floor to inspect some minor things that appear to be out of shape and in need of some attention. “Here we work all the time,” she says.

This is the most clear-cut introduction to Ms Wachira, a development engineer at the national carrier and the lead professional behind the recent repurposing of the wide-body Boeing 787 from a passenger plane to a full cargo aircraft. She was the project manager.

30 professionals
The aeronautical engineering graduate from Technical Univerisity of Kenya explains with ease how, leading a team of 30 professionals, they undertook the painstaking process of re-engineering the aircraft over a four-month period.

“This is now a zero-passenger plane. From the attendants’ station all the way to the back, crew are able to see through the whole cabin and cargo, and that is the essence of this kind of operation,” she explains as we enter the newest cargo aircraft in town.

Inside, we meet a huge hall running dozens of meters to the tail, the bare floor filled with straps and cargo restraining nets, cargo area identification labels and the many plane windows that form two beautiful light-inlet columns on the right and left walls completing this new aesthetic look.

All the seats have been removed to leave the empty field inside this wide-body aircraft, and were it not for the headroom being too limited, children could hold a football tournament in here.
At the front of the plane, just near the cockpit, some few seats have been left to act as the demarcation between the cargo and crew locations.

“This is not an ideal cargo compatible,” says Ms Wachira. “It’s something that we have re-engineered.”

For a long time, KQ has endured challenges in boosting its cargo operations — it relies on passenger operations for revenue — and getting a solution for this critical issue has been one of the most painful headaches.

Health pandemic
So when last year came, and with it a global health pandemic that grounded almost all aviation operations, the airline faced one of the toughest moments that added to a decade-long struggle to keep afloat.

With all passenger operations grounded, and with them belly capacity cargo operations, the airline realised it had to do something. The immediate solution was to load cargo on passenger seats. “But we knew that that wasn’t going to last. It was something to just relieve us that stress and provide that extra revenue for the moment,” Ms Wachira says.

A decision was made: of the nine Boeing aircrafts the airline has, two wide-body ones would be reengineered through removal of seats to make them full-cargo planes. Plans to execute the first one began immediately.

By this time, a team of KQ engineers led by Ms Wachira had already studied the aircrafts’ systems to understand what it would take to reconfigure them. They then developed a guidebook on what would be done, and how.

“We then reached out to partners for assistance on processing approvals because we required a design change. We needed a partner who could help in fast-tracking the process of getting approvals,” she says.

“The repurposing of this aircraft, being the first such in the world, took a different route from what is normal. It was different because we did not have modification instructions and no one had. What you see here has never been done before,” Ms Wachira says, explaining that the airline had to develop instructions on which it would undertake the task.

Four-month process
A process to remove almost all the seats, the class divider that demarcated the business and economy classes and mapping of the plane to guide how cargo operations would work then followed. The actual execution took a week, by a team of eight professionals.

Then after everything had been done, a virtual conformity inspection to ensure all standards had been met followed. Even though a lover of work and always active, Ms Wachira says that was one of the toughest moments for her during the entire four-month process.

“It was a tedious five-hour exercise, streaming live videos for inspectors to see everything that had happened to the aircraft, recording measurements and every little detail. There was no room for the slightest mistake,” she recalls.

When they finally got the approvals and certifications, the team of more than 30 that participated in the whole project and KQ in general were the happiest. All the other local certifications that followed were an easier task.

Last month, the airline officially launched the cargo plane.
“We are getting more feedback from all teams on what’s working and what needs improvement. In terms of design we are done, but in terms of operations it’s always an issue of continuous improvement,” she says. “What this project means for me is that we are able to explore an area that has been a dream. It gives us hope that we are able to sustain ourselves.”