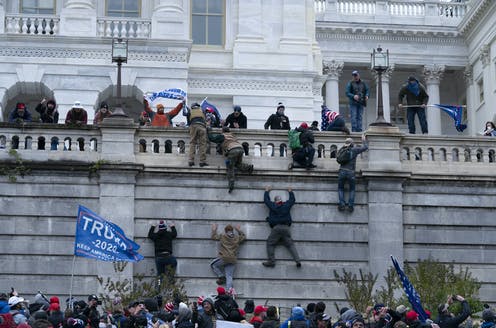 United States President, Donald Trump has been blamed for the unprecedented and violent attack on the country’s Capitol building by angry mob who were his supporters, following repeated twitter messages calling the just concluded elections in which he lost to former Vice President, Joe Biden a fraud.

There has been ongoing debate among African Americans, that a lot of dead bodies would have lying down on the Capitol building if black people were involved in what transpired on January 6,2020 in the country.

According to moguldom.com, remember Miriam Carey, the 34-year-old Black woman who was shot and killed in 2013 after making a U-turn at a checkpoint on Capitol grounds? She was considered more of a threat than the mob incited by Trump to attack the Capitol building on Jan. 6, 2020.

Four people lost their lives during the violent riots. Police shot and killed a woman who was a pro-Trump supporter and three others died of medical emergencies, according to reports.

Several police officers were treated for injuries. According to DC Police Chief Robert Contee, there were 68 arrests made, and only one person was a local.

The poor showing of security forces at Wednesday’s insurrection, while Congress attempted to carry out the will of U.S. voters, bears little resemblance to the military forces called out to control Black Lives Matter protests in the summer of 2020.

“To the surprise of many watching from the safety of their own homes, the rioters were met with much less aggressive policing than expected, in stark contrast to the images of military tanks, rubber bullets, and tear gas that were used on Black Lives Matter protesters over the summer,” WUSA 9 reported.

Capitol law enforcement is normally heavy handed, but security was unorganized and unprepared for the rush on the Capitol.

Protesters broke windows, got into official offices such as that of Nancy Pelosi, ransacked and even stole mail. Carey, by comparison, struck a security barrier with her car a block from the White House in 2013. Capitol law enforcement went on an immediate attack.

The incident led to a chase that ended with officers opening fire and shooting Carey 26 times from behind, including a fatal shot to the back of her head. Her 13-month-old baby was in the car but unharmed, WUSA 9 reported.

While the Jan. 6 Capitol breach is being called a domestic terrorist attack, there were few arrests and protesters appeared to have been given the run of the building. The handling of these mainly white, Pro-Trump protesters to the BLM protesters is a “tale of two Americas” said NAACP board member Michael Curry.

“The fact that Trump supporters were able to force their way into the U.S. Capitol is making community leaders wonder why the police response looked so different during Black Lives Matter protests,” NBC Boston reported.

Curry pointed to discrepancies between how Wednesday’s riot was handled versus the BLM protests.

“If you are of privilege and you control police departments, you get one kind of justice and one kind of policing, and you get another type if you are Black or brown in this country,” Curry said.

After the killing of George Floyd in May, Trump vowed to “dominate” demonstrators, The New York Times reported. He referred to them as “extremists” and “thugs,” while federal agents used tear gas and carried out mass arrests.

Peaceful protesters in D.C.’s Lafayette Square were met with flash grenades and chemical spray. Police officers in riot gear herded them away to clear the area so Trump could pose with a Bible in front of St. John’s Church.

Trump vowed that anyone who breached a security fence outside the White House would encounter “the most vicious dogs, and most ominous weapons, I have ever seen.”

Compare this to the tone used to describe vicious rioters at the Capitol. Ivanka Trump, for example, called them “American patriots” while urging them to stop the violence in a tweet she later deleted.

Many vented on Twitter about how peaceful Black protesters were manhandled by law enforcement while white pro-Trump supporters were allowed to take over a federal building, threaten government officials and endanger lives.

Jemele Hill, a contributor to The Atlantic, tweeted, “Let’s just be clear about something: The reason the Capitol police were slow to respond is because they gave these white people the benefit of the doubt and treated it like a joke. Their reaction isn’t the same because they see Black people as a threat that needs to be eliminated”

“Guarantee you, if that was a Black Lives Matter protest in D.C., there would already be people shackled, arrested or dead. Shackled, arrested en masse or dead,” MSNBC anchor Joy Reid told viewers on her “The Reid Out” show, Yahoo reported.

“The reason they could easily and casually — with their cameras on — film themselves throwing things through the walls of our Capitol, our property, going inside the Capitol, sitting in Speaker Pelosi’s office, casually taking pictures of themselves, have that played on Fox News… They know that they are not in jeopardy,” Reid said. “Because the cops are taking selfies with them, walking them down the steps to make sure they’re not hurt, taking care with their bodies — not like they treated Freddie Gray’s body.”

Gray, a 25-year-old Black man, died on April 19, 2015, a week after he suffered a severe spinal cord injury while in police custody, Yahoo reported.

Because Trump incited the protesters, some are calling for him to resign, among them GOP Gov. Phil Scott of Vermont.
The president’s Cabinet or Congress should remove Trump from office if he won’t resign, Scott said.

“President Trump has orchestrated a campaign to cause an insurrection that overturns the results of a free, fair and legal election,” Scott said in a statement on Wednesday. “President Trump should resign or be removed from office by his Cabinet, or by the Congress.”

Four Republicans said they want the 25th Amendment invoked. Two others said the president should be impeached. “He has to be impeached and removed,” a Republican elected official said.

Invoking the 25th Amendment would require Vice President Mike Pence and a majority of the Cabinet to vote to remove Trump from office due to his inability to “discharge the powers and duties of his office,” CNN reported.

“It’s past time for the president to accept the results of the election, quit misleading the American people, and repudiate mob violence,” said Sen. Tom Cotton of Arkansas, a Trump ally.
Under the 25th Amendment, a president can be removed if he is unable to discharge the powers and duties of his office.