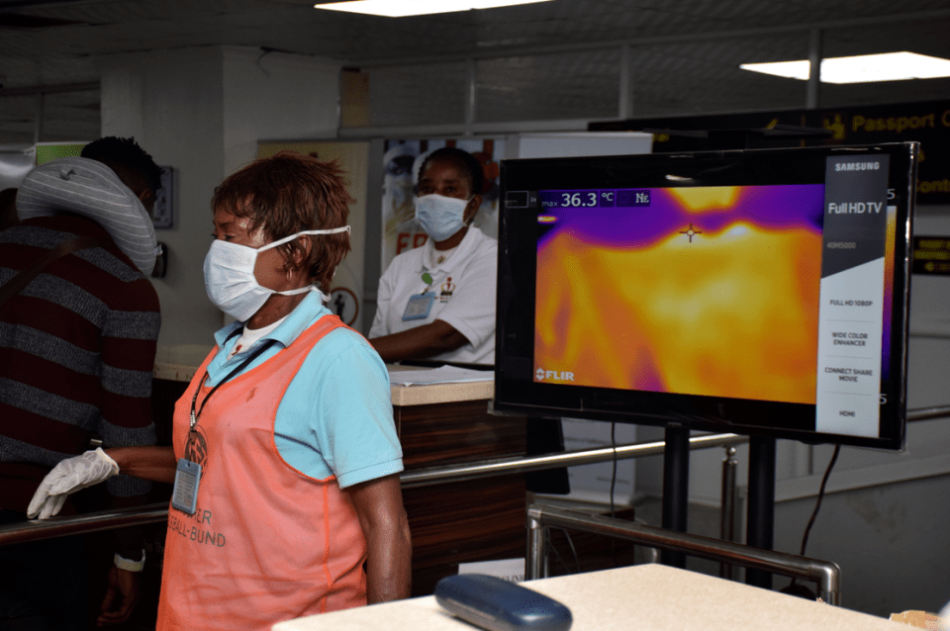 The Federal Airports Authority of Nigeria, FAAN has deployed more infrared and thermal cameras to the Murtala Mohammed International Airport, MMIA, Lagos for intensive screening of in-bound passengers, following a confirmed case of the coronavirus in Nigeria.

Regional Manager, South West Airports and Manager MMIA, Mrs. Victoria Shinaba told reporters in Lagos it needed to be more vigilant to ensure no infected persons enter the country through the airport.

Eleven more contacts of Coronavirus index case were quarantined within the isolation facilities set up by Lafarge Africa PLC, Ewekoro Plant in Ewekoro Local Government area of Ogun State.
This brings to 38 contacts, so far identified to have had contact with the 44 year Italian who tested positive of the virus in the early hours of Friday.

28 contacts had earlier been line traced and quarantined within 24 hours of the confirmation of the first case in Nigeria and Sub-Saharan Africa.

This was confirmed, Saturday, by Segun Soyoye, Lafarge Industrial Director during the on-the-apot- assesement tour of the facility by Nigeria Centre for Disease Control (NCDC), World Health Organisation (WHO), and Ogun State Government.

Those who have been quarantined, according to the management included the driver who picked the infected Italian from an hotel in Ikeja, the clinic workers and those served him food and drink.

He said the contacts are stable and have not developed any symptom while assuring that they will remain in the facility for 14 days.

Soyoye said the Italian came to Lafarge facilities in Ewekoro to inspect some installations of machines bought from a Swedish firm and didn’t go beyond Lafarge guest at Ishofin estate before he was evacuated to Lagos.

The management however debunked the that the facility has been shut down, saying the Italian didn’t have contact with production line before he was transferred.

“The contacts are now 39 and we have quarantined them, the house and clinic as well as the vehicles. We don’t take chances and that is why they are put there.

Tomi Coker, Ogun State Health Commissioner said it is also imperative for State and Federal Governments to swing into action to contain the spread of the deadly disease, as states governors have activated preventive mechanism.

3 Chinese nationals have been quarantined in Plateau state.
Five foreign nationals were placed under observation in Cross River state.

The state’s commissioner for health, Beta Edu said two of the foreigners are from Europe, one from India and two from China, and that all came in through Lagos.

“We got their biodata and asked them to self-isolate. And of course we gave them the thermometer and got their contacts. We have been following up with them.