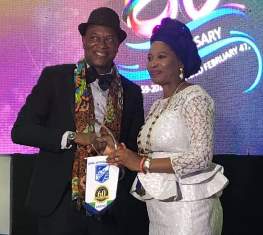 Skal International, a professional organisation of tourism leaders around the world has honoured the organiser, Akwaaba, African Travel Market, Mr Ikechi Uko for his contribution in the tourism sector and the brain behind West Africa’s biggest travel expo.

The organisation which is saddled with the responsibility of promoting global tourism and friendship, celebrated its 60th year anniversary with pomp and pageantry.

The all-important event which took place at the Red Carpet Hall, Oniru, Lekki, Lagos, brought together the who is who in tourism, travels and hospitality industry in a warm atmosphere of networking, exhibition and class.

Kicking off the well-attended event, the President of Skal International Lagos, Mrs. Rita Obidike, gave a warm welcome to all members, who are better known and recognized as Skalleagues, as well as clients, friends and family members present, noting that without their support, little would have been achieved.

“Without the encouragement and support from members and friends of this great club, today wouldn’t have happened…In Skal, we are foremost friends before colleagues or skalleagues,” she said.

She applauded every member for the landmark achievement of hitting 60 without blemish while specially thanking past presidents, officials, members and even those on ‘sabbatical’ who have made the club’s continual existence a reality.

The never a dull moment programme was further enlivened with soulful performances by the Lady of Song, better known as the Elegant Stallion, Onyeka Onwenu. She literarily got everyone present on their feet as the sing and dance along with her in rapturous ecstasy.

The body, in its usual of rewarding excellence, honoured distinguished members of the club and public who have contributed immensely to the development of travels and tourism as well as hospitality in general.

Rounding off a programme filled with glitz and fanfare, the President of Skal International, Mrs. Lavonne Wittmann, who was represented by Mrs. Julie Skol, presented a goodwill message. She regretted her inability to be present and urged all Skalleagues to keep up networking as that is the only way to remain relevant in the industry.

“The African continent with its 54 countries urgently needs to have a bigger footprint in Skal International and a concerted effort by each member in Africa must be implemented as soon as possible as tourism in most African countries is their most important economic activity,” she noted.

The event was graced by the presence of very important personalities including a handsome representation of the Lagos state government.
The Skal Club Lagos was formed on February 4, 1959 as the 182nd member of the International Skal Club.