LOCAL MEDIA’S TALK OF PLANE CRASH WILDLY OFF THE MARK 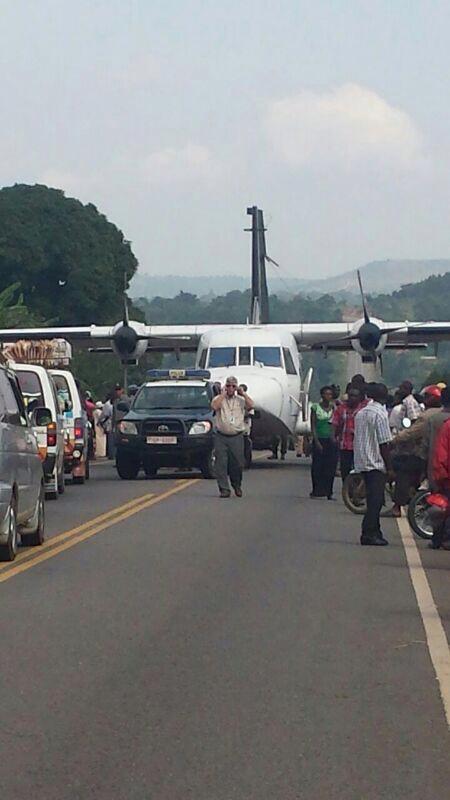 Reports are coming in of a twin engined turboprop aircraft, allegedly carrying American service personnel from Entebbe to an undisclosed destination in South Sudan, had to return due to bad weather, then apparently running short of fuel and setting down on a public highway near the Ugandan town of Mityana. Local police is on the scene to keep spectators at bay and to direct traffic around the stranded aircraft without colliding with the plane.

From initial reports it appears that no one was injured as the pilots did some skilful aviating when they brought the plane safely down on a busy highway.
Local media immediately jumped, as often before, to the wrong conclusions and used language bound to cause public anxiety, when both leading newspapers in flash news spoke of a plane crash, something which never happened and something anyone can now ascertain as the pictures are available showing the plane safely on the road without any damage.

In the aftermath of the Malaysian Airlines B777-200 being shot down over Eastern Ukraine it is well near irresponsible to mislead the public about a crash which never was, totally misinterpreting information and turning a successful emergency landing into something much worse.From information now received it appears that at least 8 American personnel were on board, plus a crew of two.
An immediate search of the plane’s registration N604AR showed it to be a Casa 212 aircraft, reportedly owned by EP Aviation LLC in Wood Dale Illinois, though a second search result brought up the name of Blackwater Aviation.
For accurate breaking aviation news look from Eastern Africa look no further than this blog.