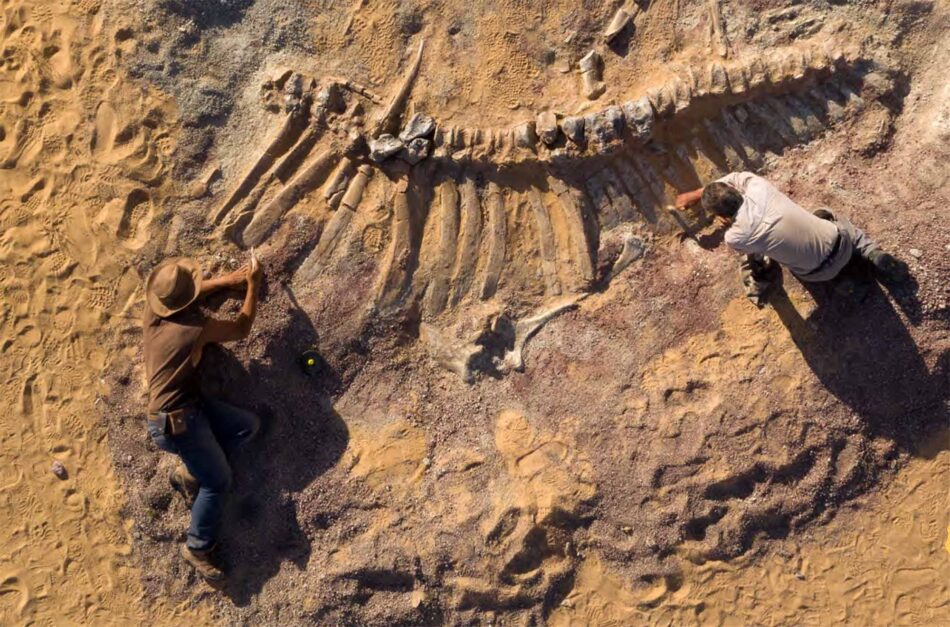 Sixty four years American Palaeontologist, Paul Sereno, one of the world’s most famous dinosaur hunters — has earned a reputation for ground-breaking discoveries.

But he still believes that his newest expedition will be the one that puts him in the history books.

According to explorersweb.com, Sereno with a huge team of scientists, locals, and bodyguards, Sereno will travel to Niger this month to try and unearth 25 tons of fossils — both saurian and human.

During past expeditions to the remotest reaches of the country’s Sahara Desert, Sereno discovered treasure troves of dinosaur bones, many of them from species new to science. But he also found an archaeologist’s dream: a rich fossil record of an ancient human society that lived in the desert during a time of abundant water and wildlife.

Sereno and his team will face sand dunes, roaming bandits, extremist groups, and some of the Sahara’s most intense heat. Assuming all goes well, Sereno then plans on using the new collection to establish museums for both Niger and his own University of Chicago.

If you’re getting Indiana Jones vibes, Sereno wears that reference proudly. According to an overview of the expedition Sereno produced himself:

“This is high-powered, adventure-packed, cutting-edge science — as close as one will ever get to a real-life Indiana Jones experience — with a leader who can fill those boots and an international team of young scientists aiming to dig up a lost world of African dinosaurs.”

The expedition has already left. For the next several weeks, Sereno and the team will return to the Sahara in search of history.

A new cast of dinos
The dinosaur species Sereno discovered in the Sahara read like a casting call for the next “Jurassic World” film.

They include a digging raptor, a reptilian armadillo, and a sail-backed predator. There are also new species of long-necked behemoths, 12-metre-long crocodiles, flying reptiles, and enormous predatory fish.

It turns out that “vast expanses of the Sahara have fossil-rich rocks,” Sereno wrote. While French paleontologists found dinosaur bones in Niger as far back as the 1950s, the landscape has remained mostly unexplored. That is, until Sereno started going there in 1993.

He’s brought back many finds to the Fossil Lab at the University of Chicago. There, a team brings the species to life through research and artistic renderings.

These dinosaurs will be the “newest stars in Africa’s Lost World”, a major exhibit planned by Niger Heritage, a nonprofit that represents the next part of Sereno’s ambitious plan.

A new heritage for Niger
It’s easy for dinosaurs to steal the spotlight, but the ancient Saharan human civilization is no less important to science.

These more-recent fossils tell the story of a people that existed between 10,000 and 5,000 years ago. Back then, the Sahara Desert was “green”. The evidence suggests a time of lakes teeming with two-metre perch, as well as hippos, crocs — and human settlements.

This archaeological site, called Gobero, includes a human graveyard and thousands of artifacts. Two successive cultures (Kiffian and Tenerean) “thrived for millennia as hunter-gatherers living lakeside and hunting wildlife, catching fish, and avoiding crocodiles and hippos,” according to Sereno’s website.

The most famous burial, about 5,700 years old, involves three skeletons: a woman facing two young children. (The image of their gently touching skeletons was widely shared upon its discovery.)

“Like Niger’s paleontological record, Gobero is unique in its importance for documenting human cultures during the African Humid Period prior to the building of the Egyptian pyramids,” Sereno wrote.

For most of the history of paleontology, the next step for Sereno would be obvious: pack everything up and bring it home.

But Sereno has other plans.
Museums for Niger
Paleontology and archaeology both have deep roots in colonialism. The collections at the world’s most beloved science museums would look very different if past discoverers had not transported artifacts across national borders.

But Sereno believes that Niger has a right to showcase its own heritage, whether its dinosaurs or ancient civilizations.

“Paul and a team from Niger have designed award-winning plans for two groundbreaking, zero-energy museums, one located in the middle of the Niger River in the capital Niamey and the other in the desert oasis Agadez, crossroads of the Sahara,” according to Sereno’s website.

You can see also videos of the Niamey and Agadez museum projects. The effort reflects Sereno’s belief that his science isn’t just about the past — it can help make a better future.

“We found a woman wearing an elephant ivory bracelet, a 10-year-old wearing a hippo bracelet,” he told The Chicago Tribune. “Why disarticulate that and put it in a shoe box when I can remove them intact? When you can give a country part of its heritage, that fills museums and attracts people for generations? You know I once almost left this field.

I couldn’t see how finding a bone or naming a species would save the planet or help anyone at all. Eventually, I realized, no, this is the discipline to make change that lasts.”